A conservative politician and a drug user activist may seem like an unusual duo. Yet, Dean Wilson and Philip Owen’s improbable partnership started a transformation in the public understanding of substance use as a health issue rather than a criminal justice issue that has lasting impacts to this day.

Philip Owen became a surprising advocate of evidence-based research and solutions for substance addictions, at a time when very few people were. His work has saved countless lives across North America and has set the foundation of BCCSU’s work.

Philip Owen was mayor of Vancouver during the peak of the HIV and overdose epidemic in the mid-90s. In 1993, over 200 Vancouverites died of illicit drug overdose, and the combined death tolls of overdoses and HIV/AIDS reached nearly 700 across B.C. With high overdose, HIV, and hepatitis C rates, it was clear that the city needed a new approach.

At the time, Dean Wilson led the Vancouver Area Network of Drug Users (VANDU), a grassroots organization of people who use drugs. On September 12, 2000, the activist group interrupted a city council meeting that was just about to pass a 90-day moratorium on spending and services for drug users in the Downtown Eastside, the epicentre of the crisis. To members of VANDU and the Downtown Eastside community, this was essentially a death sentence. They estimated that about 90 people would die from drug overdoses if the moratorium was instated, and they weren’t going to let it happen. The activists made this undoubtably clear by delivering a makeshift black coffin to the mayor’s feet.

To everyone’s surprise, the mayor listened and quickly began to work.   “Dean affected my father in that he put a human face on addiction,” says Chris Owen. “My father woke up one Christmas morning and wandered through the Downtown Eastside. That’s when he saw all the suffering. He realized that the problem that had been dealt with by government as a criminal issue was really a health care issue for the outright suffering he witnessed.” 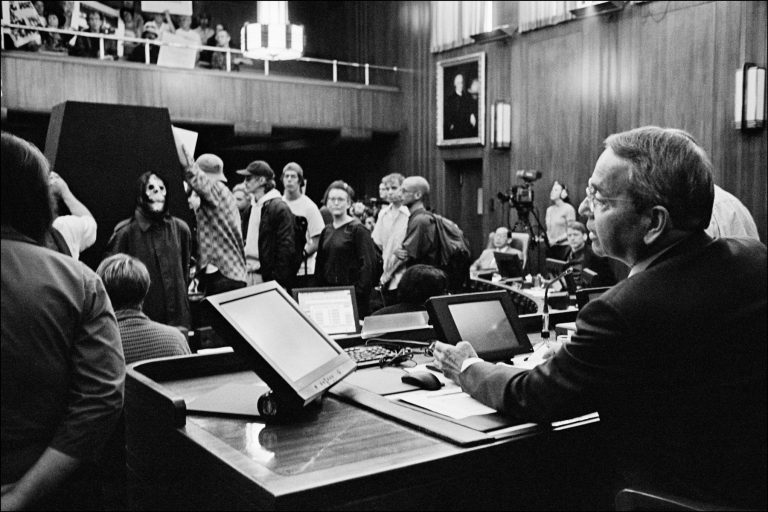 Working in collaboration with experts in substance use and drug policy, the mayor led the development of the A Framework for Action: A Four-Pillar Approach to Vancouver’s Drug Problems in 2001. Known today as the “Four Pillars Approach” it marked a revolutionary shift in the way Vancouver understood substance use and addiction, reframing illicit drug use as a public health issue, rather than a legal one that should be dealt with mainly through policing.

A novel strategy pioneered in Switzerland, the approach introduced the then-controversial concept of harm reduction, alongside prevention, treatment, and enforcement.

“He had a lot of affection for the people affected,” recalls Chris Owen. “He became a fellow warrior in this public relations battle that would later unfold.”

Mayor Owen faced a great deal of criticism, not only from his constituents, but even his own colleagues and friends.

Wilson recalls the controversy at the time. “There’s certain people that really did things that were completely 180 degrees, and Philip did that. A lot of people turned on him for it. People really criticized him and he said, ‘No, it is the right thing to do. We can't forget about anybody in our society.’ He changed how people thought about us.”

The controversy around the Four Pillars Approach ultimately cost him his job, but not before it saved the lives of thousands.

A lasting legacy, supported by donors

In 2003, Vancouver opened Insite, a legal safe injection site that was the first of its kind in North America. There have been more than 3.5 million visits to the facility and today it is recognized for reducing fatal overdose, significantly decreasing infectious disease transmission, and for improving overall health amongst those who use illicit drugs. It exists because of the foundation Philip Owen helped lay with the Four Pillars Approach.

Now, as BC faces a second overdose crisis linked to fentanyl-contaminated street drugs, Owen’s courage and vision are being honoured with the creation of the Philip Owen Professorship in Addiction Medicine at the University of British Columbia.

“I’m incredibly thrilled that Philip is being honoured for standing up,” says Wilson.

The professorship is the first-ever in Canada, and is made possible by donors who believe in the need to continue Owen’s legacy of leadership, courage, and innovation in the area of substance use and addiction.

Dr. Nadia Fairbairn, the inaugural holder of the Philip Owen Professorship, will carry on Owen’s legacy by advancing made-in-BC research and education in addiction medicine.

“I’m honoured to be the inaugural holder of the Philip Owen Professorship in Addiction Medicine. The story of Philip Owen in the documentary ‘FIX: Story of an Addicted City’ was really formative for me and it inspired my career. I’m grateful to the community of donors whose generosity has made this possible,” Dr. Fairbairn says. 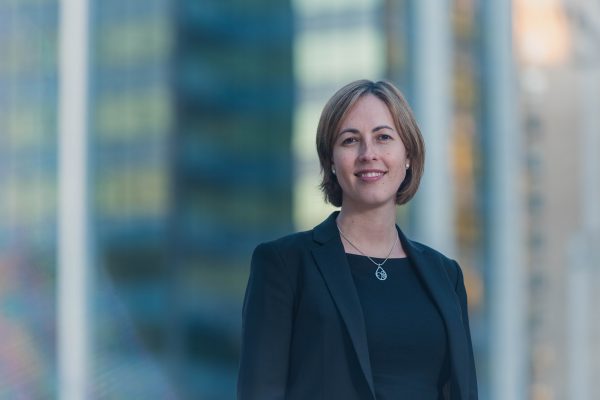 When asked about her vision for the Professorship, she emphasizes the urgency in closing the evidence-to-practice gap in addiction medicine during BC’s overdose crisis. She stresses that even though addiction is one of the most prevalent conditions in the general population, there is a substantial gap in substance use and addiction training amongst medical practitioners. Her goal is to innovate solutions to increase training and develop effective treatments for more people.

“It's a really important form of advocacy for donors to donate to this traditionally underinvested area of medicine,” says Dr. Fairbairn. “It makes a statement to the public that when it comes to substance use, those much-needed investments are important. That there's a lot of hopefulness in terms of what we have yet to learn.”

The professorship represents Philip Owen’s innovation and compassion, and serves as a mirror to the past in hopes of sparking a life-saving response emblematic to the one he once led.

Your ticket for the: Philip Owen Professorship sparks hope during overdose crisis