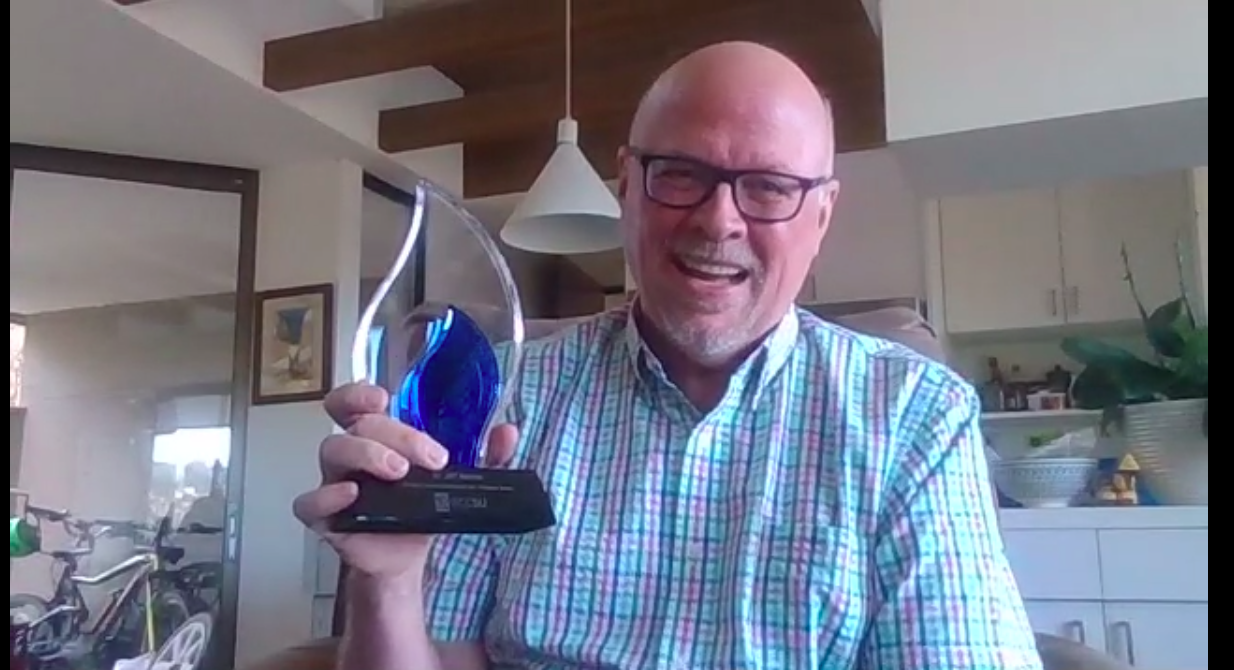 When Dr. Jeff Harries was invited to join a Zoom call with some of his colleagues in Interior Health, he probably thought nothing of it. Though he's now retired, the Penticton-based physician – like all of us these days – has become accustomed to these virtual meetings.

This call was different though: a dozen of Dr. Harries' colleagues and friends had gathered to surprise him with an award recognizing his years of advocacy on behalf of patients with alcohol use disorder.

The Primary Care and Substance Use Trail Blazer Award was presented by the BC Centre on Substance Use (BCCSU) in recognition of the many years that Dr. Harries has tirelessly advocated for alcohol use disorder to be understood as a treatable medical condition. His message: taken temporarily and as a complement to counselling and other supports, medications can successfully help just about everyone reduce consumption by easing cravings and withdrawal symptoms.

"It's such a tremendous honour to be able to recognize Dr. Jeff Harries for his many, many contributions," says Cheyenne Johnson, executive director of the BCCSU.

"We're not only presenting Dr. Harries with this Primary Care and Substance Use Trail Blazer Award as the inaugural recipient, he's also the inspiration behind the creation on the award," she says. "His tireless leadership as a health advocate and his unwavering commitment to improving how we treat people with alcohol use disorder has inspired colleagues and impacted the lives of countless people. We thank him from the bottom of our hearts.”

Over the past four years, Dr. Harries has given more than 150 presentations, reaching 4,000 individuals across BC. His approachability and infectious passion for improving medical care for such a long-neglected substance use disorder has helped move clinicians forward in their knowledge about effective treatment options. His efforts have been so noteworthy that he was profiled in The Globe & Mail.

"Jeff has provided hope for everyone in the circle of care of alcohol use disorder patients," says Lori Motluk, who's board chair of the Canadian Alcohol Use Disorder Society (CAUDS) – an organization that Dr. Harries helped found.

"His philosophy is that alcohol use disorder is a chronic brain disorder that can be treated scientifically through the short-term use of medications. His respectful approach has inspired patients, renewing their hope of managing their chronic disorder and connecting with family and community. Physicians and clinicians who have followed his practice are sharing their stories further promoting Jeff’s work."

At the award presentation, colleagues of Dr. Harries shared their reflections on Dr. Harries' impact on the medical community and their own professional development, noting how he's begun his outreach work when no one else was there to support him, displaying perseverance and conviction that has inspired countless clinicians to follow his lead.

“On behalf of Interior Health, I’d like to congratulate Dr. Harries for this well-deserved recognition," says Susan Brown, President & CEO of Interior Health. "He truly is a trail blazer, having worked tirelessly over the years to promote the treatment of alcohol use disorder and spread the word about the successful medications that have helped so many people in their recovery.”

A sign of his commitment, when he found out the BCCSU was developing provincial guidelines for high risk drinking and alcohol use disorder, he wrote the team with a simple question: "How can I help?"

Dr. Harries joined the guideline writing committee and immediately began presenting the key recommendations throughout the province and beyond – all with the goal of making improvements to screening, prevention, treatment, and care for people with alcohol use disorder.

Motluk puts it simply: "He thought and acted big!"

Your ticket for the: Dr. Jeff Harries: Profile of a Trailblazer