More than 2,200 British Columbians lost to illicit drugs in 2021 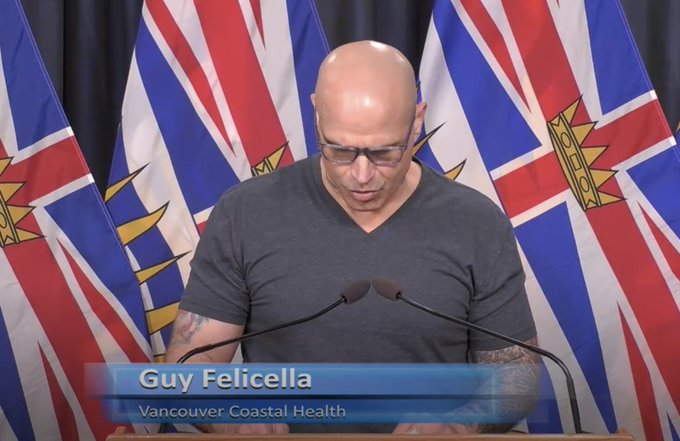 BC Centre on Substance Use Peer Clinical Advisor Guy Felicella was invited to speak at the Coroners announcement. Here are his remarks:

I want to start with an apology. Everyone who has lost somebody to an overdose deserves that much and sadly, to date, I don’t think they’ve received it.

For those who currently use drugs, to their families and communities who care for them and spend sleepless nights worrying for them, I say: “I’m sorry.” You don’t deserve to live like this.

I say these words because it’s what I long to hear myself from those who have the power to change the laws and policies that are killing people.

For years, I lived in a cycle of drug use, addiction, and criminalization. I used drugs to manage my personal pain and trauma. I was repeatedly treated as less than a person, as disposable piece of garbage simply because of my drug use.

I’m one of the lucky ones – I escaped this cycle alive. But many of my friends did not.

An apology is the least we should expect from those we’ve elected at every level of government to protect us and our communities. They have failed us. Their failure is represented by the more than 2,200 deaths last year and thousands dead since this crisis began. Where is the apology?

Where are our political leaders, who should be standing here beside me, and in Ottawa, and in provincial legislatures across the country to acknowledge their failure and share what they’re going to do to end this crisis?

Why do we only hear from some of them once a month at best, simply acknowledging the number of people who’ve died, to take a public flogging for a day and then move on?

Where is our Prime Minister today? Where is his statement declaring that the number of needlessly dead Canadians is unacceptable, that there is something his government can do and will do?

I join the many others today who are feeling heartbroken, frustrated, and angry. Nearly six years into this public health emergency and nothing has changed except for the faces of those who have died.

How is this possible?

What kind of a society are we that lets thousands of people die preventable deaths?

I don’t just point the finger of blame at our politicians, both also at those in power and those in opposition who are equally responsible for where we find ourselves today. Yes, it is their inaction many years ago that has led to so many deaths. But I also look to you, my neighbours, and to yours, and I ask: How have we become so cruel to one another that we cannot even hold those who have the power to stop this to account?

As much as I am saddened over the lives we have lost, and will lose, I am saddened for this world that seems drained of every ounce of compassion or empathy.

Nearly six years into this public health emergency and one thing has become abundantly clear: some lives matter more than others. And the lives of people who use drugs don’t seem to matter all that much. Not to you and not to those who can stop this never-ending crisis.

What we’re doing is not working. After six years of this, it’s clear that we’re not learning from our mistakes. We’re wasting mistakes, we’re wasting those lessons – and it’s costing lives.

These are the mistakes we continue to make:

Number 1: We continue to wage a bloody, expensive, and losing war on drugs.

We’ve given up control of the drug supply to organized criminals. The thousands of dead British Columbians tells us that efforts to limit the supply through law enforcement have failed. Drugs we’ve made illegal are easy to access. Millions of dollars are invested – and billions in profits are made – by organized crime rings whose job it is to make drugs easier to produce, easier to traffic, and more addictive.

Are we really relying on organized crime to make changes to the drug supply that will make it less deadly, less toxic?

The Coroner’s toxicology reports tell us that the drug supply is changing for the worse. Fentanyl is not the only problem. Now it’s benzo-dope. Drugs are cut with more and more addictive substances. We spend billions of dollars trying to keep drugs out of the country and then billions more trying to reduce the harms of those that make it into our country. The war on drugs has gone from a sound defeat to an absolute debacle.

Not addressing the clear and obvious need for a regulated drug supply is essentially lining the pockets of organized crime.

If you don’t support safer supply, who are you supporting? Ask yourselves, who is that benefits from our current policies?

We continue to fail to understand why someone might use drugs in the first place. That failure has led to the fractured, ineffective systems that are meant to help people.

First, we thought that drug use was a moral failing. That led to prohibition and criminalization, which has only made drug use more dangerous. We’ve been far too slow to recognize this thinking was wrong and only now there seems to be some efforts to end criminalizing drug use.

Then we decided that all drug use was addiction. Wrong again. This has led us to look to the health care system to solve this problem. The fact is, not everyone who uses drugs has an addiction.

For those people, drug use isn’t the issue, it’s drug policy that is the issue.

And for those who do have an addiction, getting access to treatment and recovery is extremely challenging. Where has the investment in our health system to make treatment accessible for anyone, anywhere, when they seek it?

Number 3. We refuse to face the realities of where people who use drugs are at.

Today you may hear that BC is making safe supply happen. The truth is, access to a safer supply is far too challenging.

That’s not because efforts aren’t being made, it’s because those efforts fail to acknowledge the realities of drug user’s lives.

Safe supply is being crammed into a prescriber model, despite it being obvious that this won’t meet the needs and demand of all people who use substances. You need a diagnosed substance use disorder to even qualify, which excludes tens of thousands of people who don’t. The policies that are in place say that if you use illicit drugs you must stop. Yet not all drug use is an addiction.

The current policies also don’t offer the substances that will actually help separate people from toxic drug supply. We need heroin to be accessible and central to safe supply.

Number 4. We’ve become good at announcing initiatives but bad at implementing them.

The problem I see repeatedly is the recognition that things need to change, but the lack of follow through to make that change a reality.

Where, for example, are the overdose prevention sites that were promised could save so many lives? The province offers funding but too many municipalities don’t want them in their community.

Where are the treatment beds for people outside of the lower mainland? We hear about new investments in beds, but how many are sitting empty right now? Why aren’t they accessible to people in rural communities?

These are the mistakes we make over and over again – announcing things that never happen. Until we start learning from these mistakes, and changing, we will continue to let people die.

To those media members gathered here today, I thank you for covering this news. Many of you have been working hard to share these stories since this crisis began. To others, I ask this of you:

Please hold the politicians and policymakers in your communities to account, not just today, but every day.

Please tell the stories of people who use drugs in a way that helps your audience better understand why our systems are failing them, stories that detail the many barriers so many of us face trying to get proper health care.

Please do not use images of people in alleyways or needles in a puddle when you tell these stories. Showing people using in back alleys doesn't reflect the reality of drug use. It's in every city in every community. These images only create more stigma towards people who use drugs or are living in poverty.

We need you to share these stories to explain to people why these deaths are happening and hold policymakers to account – not just today, but every day.

I’ll repeat: You should not have to be drug-free to receive health care.

Thank you for listening.

Your ticket for the: More than 2,200 British Columbians lost to illicit drugs in 2021

More than 2,200 British Columbians lost to illicit drugs in 2021