Concerns with the recent rapid review of safer supply interventions 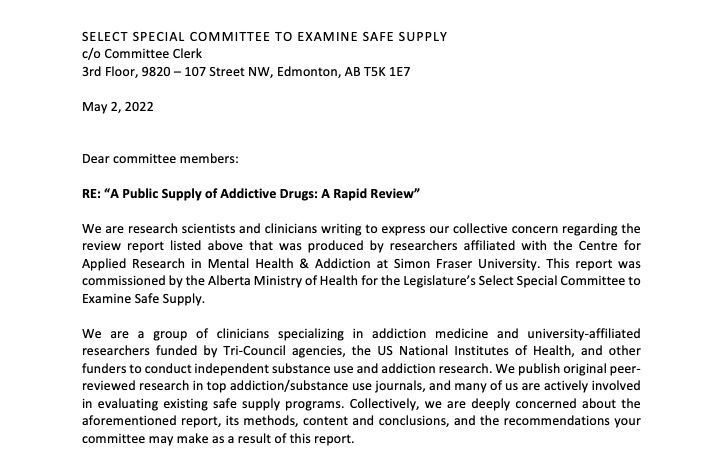 In December 2021, the government of Alberta established the Select Special Committee to Examine Safe Supply.

The Committee was created as deaths from the toxic illicit drug supply continue to rise both in Alberta and across Canada. Provincial data from Alberta showed that 2021 was the deadliest year on record, with 1,758 people dying from toxic drugs. Nationally, there were 5,368 toxic deaths between January and September 2021 – and over 23,000 deaths since 2016 – meaning nearly 20 Canadians are dying every day from the drug supply.

In light of these worsening trends, public health experts have recognized that the current approach to addressing the toxic drug supply has not been successful in reducing deaths, and have called for innovations in programming and policy. Among other innovations in harm reduction, treatment, and recovery, a focus has been on safer supply distribution and evaluation – an approach that calls for the provision of pharmaceutical-grade substances in order to reduce people’s reliance on the illicit drug supply. Health Canada, several provincial health ministries, and a recent expert review panel assembled by B.C.’s Chief Coroner have all called for the immediate implementation and evaluation of safe supply interventions.

The Alberta committee’s mandate is:

The BC Centre on Substance Use (BCCSU) previously raised significant concerns regarding the structure of the committee’s work, including the failure to engage individuals involved in the evaluation of existing safer supply interventions, a lack of involvement of individuals with lived and living experience of substance use, addiction medicine specialists, families impacted by substance use, researchers and public health experts. A further concern relates to the committee’s overreliance on submissions from individuals with a history of being critical of safer supply. Based on these concerns that were shared with the committee, the BCCSU declined participation in the process.

However, BCCSU did share numerous studies evaluating safer supply programs in B.C. with both the committee and the lead reviewer contracted to provide an analysis of research on this subject. That analysis has since been completed and a rapid review of safer supply research, as commissioned by the Alberta Ministry of Health (renamed as “public supply of addictive drugs” research) was produced.

BCCSU researchers with expertise in reviewing methodologies undertook an assessment of the “rapid review” produced for the committee using AMSTAR (Assessing the Methodological Quality of Systematic Reviews) – a well-established measurement tool to assess the methodological quality of reviews of randomized and non-randomized research. The review was rated as being of “critically low quality”.

Among the primary issues with the review is a flawed search strategy that resulted in a number of studies unrelated to safer supply being included, and a number of important and highly relevant studies being excluded. Beyond these methodological concerns, other issues are evident with this review, including the misrepresentation of study authors’ expertise, a lack of a public health perspective, and the failure to acknowledge the current state of safer supply research and other publicly available data.

While several small safer supply programs have been recently implemented rigorous outcome-based data is still lacking due primarily to the newness of these programs and lack of longitudinal follow-up, as well as their current limited reach and enrollment. The implementation and evaluation of safer supply programs have been supported and funded by Health Canada, and preliminary data derived from program evaluations and qualitative studies suggest some benefits and also point to important operational limitations of existing models. Additionally, grey literature, including knowledge updates data from the BC Centre for Disease Control, were not referenced in the review. The review fails to acknowledge this current landscape and the evidence that is emerging.

Further, while they do not cite any evidence demonstrating that safer supply interventions are ineffective or harmful, the report’s authors still claim that this is a dangerous and unethical form of intervention with immense potential for harm. They write that the provision of safer supply will be “associated with highly probable adverse effects,” but fail to cite empirical work to support this claim. Indeed, an initial evaluation of British Columbia’s Risk Mitigation Guidance indicates that overdose deaths continue to be attributed primarily to the illicit and toxic drug supply and not the introduction of safer supply programs.

Safer supply is regarded as a key intervention to prevent overdose deaths arising from exposure to the contaminated and highly toxic drug supply. However, ongoing evaluation must be completed before firm conclusions are reached regarding the safety, effectiveness and potential unintended consequences. Unfortunately, neither the “rapid review” nor Alberta’s committee evaluating safer supply seem willing to make these considerations of the potential role of safer supply as an intervention to reduce overdose deaths.

The ongoing and escalating overdose epidemic necessitates bold action. Accepting the status quo and incrementally scaling up existing interventions has proven to be ineffective. As noted in the 2022 report “BC Coroners Service Death Review Panel: A Review of Illicit Drug Toxicity Deaths”:

“A new approach is required, one that includes a specific focus on the toxic drug supply. The provincial response to the COVID-19 public health emergency has demonstrated that urgent action, coordinated efforts, and new ways to approaching complex problems are possible and impactful.”

This new approach must include engagement with the science and the board ranged of lived and living experience to genuinely inform impactful policy and programming decisions.

Your ticket for the: Concerns with the recent rapid review of safer supply interventions

Concerns with the recent rapid review of safer supply interventions