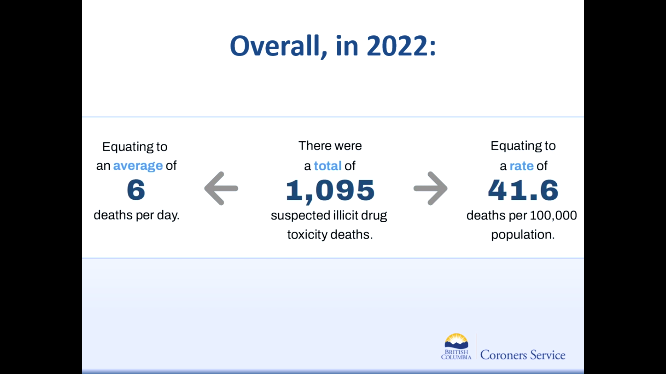 At least 1,095 British Columbians are believed to have been lost to the toxic drug supply between January and June 2022, according to preliminary data released by the BC Coroners Service on August 16.

The number of deaths from toxic drugs in B.C. between January and June is the highest ever recorded in the first six months of a calendar year. More than three quarters (78%) of the lives lost in 2022 were male and nearly the same percentage (73%) were between the ages of 30-59. On average, more than six lives have been lost to illicit drugs every day this year.

Ten thousand lives have been lost to illicit drugs since declaration of public health emergency in 2016.

Guy Felicella, peer clinical advisor at BCCSU, and Leslie McBain, co-founder of Moms Stop the Harm and family engagement lead at BCCSU, both spoke at a media event on August 16 along with Chief Coroner Lisa Lapointe and British Columbia's Representative for Children and Youth, Dr.Jennifer Charlesworth.

Six months ago I stood here at this same podium and I offered an apology.

I apologized to everyone who has lost somebody to an overdose. I apologized for them becoming victim to decades of failed policy.

Today I stand here and that apology feels so useless in the wake of hundreds of more deaths. Today I’m angry – angry that the loss of life and sacrifice people have made feel like they’ve been for nothing.

Six years ago, nearly 1,000 people in this province died from the illicit drug supply in a single year. Today, the same number of people died in just half the time.

Today I’m angry because the only thing that’s really changed over the past six months and past six years is that the unregulated drug supply has gotten worse. It’s become more dangerous and more unpredictable.

Change little and little will change.

And that’s why I’m angry. We’re not doing enough and it’s killing people. For years, it’s been little more than incremental changes. A pilot project here, a few new treatment beds there. Nothing substantial has changed with our laws and policies that are leading to so many deaths.

When I was living with addiction I got multiple chances to get better. I overdosed six times. I went into treatment a dozen times. Finally something clicked for me. I’m grateful that I had so many opportunities to reach that point so that I can be here today.

The toxic drug supply means that most people won’t get multiple chances like I did though. The toxic unregulated drug supply is unforgiving. There is no margin for error. That’s if they even can get a first chance.

This is not an addiction crisis, it’s an illicit drug toxicity crisis.

I meet people every day who are seeking help but can’t get it. And then society blames them for their failures. That makes me angry too.

I get angry when I hear stories about someone trying to see a doctor but they couldn’t.

I get angry when I talk to someone who tried to access detox and were told it was a 12 week wait.

I get angry when I hear story after story of people being turned away when seeking safer supply from a prescriber.

We haven’t been able to give people an alternative to the illicit drug supply — whether that’s through safe supply or treatment and recovery. And so they die.

There’s something else about all this makes me angry:

Much of the reason why people are dying, why people are unable to access treatment and care, is because stigma and discrimination towards people who use drugs is so pervasive that policymakers feel like they can’t or don’t want to do what’s necessary to address this crisis.

Stigma and discrimination are also driving people to use alone and the majority of people who are dying are using alone.

People are using alone in their homes — that could be a home just like yours or mine. Make no mistake, if you haven’t been personally impacted by this crisis, you will be.

This is happening everywhere in the province. This is in your community. People are dying – and they’re dying alone – in Delta, Fort Nelson, Cranbrook, Vernon, Duncan. Everywhere. No community has been untouched by this.

But don’t think that dying alone means that they leave nothing behind. These deaths represent somebody’s someone. These are cherished people. They died from a combination of a toxic drug supply and failed drug policies.

The pain of loneliness isn’t visible, but it’s very real. But stigma is driving people to this isolation and despair. This is the state that we’re allowing people to reach because of our collective inaction.

Young people see and hear how we talk about drug use and people who use drugs. They internalize those messages.

The messaging they hear about drugs is enforcing substance use stigma, passing on shame to the younger generation. They’re told that drug use equals addiction, when the truth is that not all people who use substances develop a substance use disorder or any issue at all.

How we talk about drugs and drug use plays a huge role in why people avoid reaching out. The language we use around drug use and the issues that motivate drug use mean that young people are left to cope alone and in isolation.

They’re already dealing with stigma and not talking about it because they’re ashamed. How are kids supposed to feel comfortable with asking for help when they know they’ve already been judged?

I regularly give talks at schools and youth organizations. Young people tell me that they’re using drugs alone. The services to support them don’t meet their needs and aren’t accessible where they’re at, if they exist at all. That sends a message to young people too. The message is: we don’t care what happens to you.

That young people today – whether they use drugs or not – feel this way breaks my heart and makes me angry.

One teen came up to me after a recent talk I gave at their school and thanked me for saying drug users aren’t bad people.

Stigma is the direct result of our policies. We can’t expect things to get better if we continue to do nothing.

Nothing will change is we don’t make safe supply accessible to anyone who needs it.

We have to change.

I would like to say that this tragic 6 month report is unbelievable. But I can’t say that because I have seen the past 6 months through the eyes of families whose loved ones have died by toxic drug poisoning.
I am angry too.

Nothing substantive has changed in 7 years. Nothing the government has done has changed this catastrophic failure of drug policies that continues to kill the people who must access the drugs they need in the black market, which is largely run by organized crime.

You could say that the government is actually supporting this dynamic by its inaction.

I come from the family perspective. Moms Stop the Harm has 3700 members across Canada and about 1700, mostly Moms right here in B.C.

Seven people die every day in B.C. of drug poisoning, seven families get that call, the one we are terrified to get. I received that call in 2014. It is a call you never forget. It is a call that changes your life forever.

Seven families will get that call today. They will scramble to inform the rest of the family, friends, neighbours, bosses. They may encounter the terrible stigma present in those they tell.
They’ll need to arrange funerals and might have to deal with law enforcement and other agencies. And they are grief stricken for the rest of their lives.

These deaths were preventable.

That piles hurt upon hurt.

Then there are the families whose loved ones are still with us, currently needing to access the illicit toxic drug supply. When the phone rings or there is a knock at the door, mothers and others fear it is with the message they knew might come.

And as Guy has said, those who must access the toxic drug supply, brush up against death every single day. And they know it might be they themselves that die. Where is the justice in that? Where is the compassion, the empathy?

Our legislators, our politicians, our leaders and bureaucrats in the ministries of health, and of mental health and addictions have yet to treat the 10,000 deaths as an emergency. I ask, how many will it take?

We have lost a generation of innocent people to a preventable death in this province because the government is still stuck in prohibition, a failed hundred year old drug policy.

I ask our Premier, John Horgan, Our Minister of Health, Adrian Dix, and our Minister of Mental Health and Addictions Sheila Malcolmson to actually implement the recommendations of the Coroner’s Death Review Panel, a group of highly qualified experts who have informed them in no uncertain terms, how to stop the epidemic of death.

Only then will the deaths subside.

I will tell you a story of hope. Two weeks ago my good friend Sarah who has a 24 year old daughter, Victoria, who has lived in the DTES and has been addicted to illicit substances for several years, called me.

Victoria had been having severe seizures once in a while because of her drug use. But this time they were so severe she ended up in the ICU at St. Paul’s Hospital in Vancouver. She was there for four days until she was transferred to a regular medical ward. While in the ICU she was treated with respect, kindness, compassion and good treatment.

On the regular ward she experienced the same – good care, respect and she was treated as an intelligent person with medical needs. Victoria saw an addictions team. Before she was released to go home with her mother, she was contacted by the wonderful addictions physician who called Victoria’s pharmacy with a prescription for the drugs she needed to progress to the next step. She is back home with her family and doing well. This is how it should always The solution is not impossible; therefore it is imminently possible!

And while we’ve all been speaking here, there is a high probability that someone in BC has died of toxic drug poisoning.